The FanDrive DV280 is the most powerful of the fan drives provided by ebm-papst. Rainer Müller, respon­sible for the engines mechanics, presents the new power­house.

Which appli­ca­tions did you have in mind when devel­oping the FanDrive DV280? 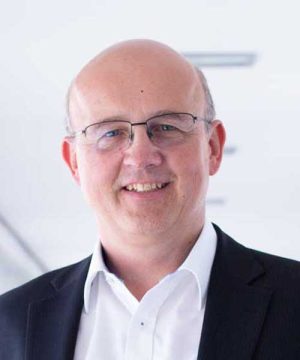 Rainer Müller, respon­sible for the engines mechanics of the FanDrive DV280

Specif­i­cally appli­ca­tions involving venti­la­tion tech­nology, cooling towers, or process cooling where large fans with impellers of up to two meters in diam­eter are required. These appli­ca­tions often still use AC motors in combi­na­tion with vari­able frequency drives, trans­mis­sions, or belt drives. The new, robust FanDrive DV280 delivers a high torque of 180 Newton meters at an elec­trical input capacity of up to 24 kW, making it suit­able for universal use on large fans.

Does such a large unit not also use a lot of power?

No, quite the oppo­site! Thanks to the state-of-the-art EC motor, the energy consump­tion and oper­ating costs can be signif­i­cantly reduced with the FanDrive DV280. That aspect is becoming increas­ingly impor­tant for oper­a­tors. When the next stage of the Ecode­sign Regu­la­tion for fans comes into force, if not before, many fans that are powered by an AC motor will no longer meet the minimum require­ments for effi­ciency. When that happens, the right drive solu­tion will be a high-perfor­mance EC external rotor motor that oper­ates at high effi­ciency levels. In addi­tion, EC fans are infi­nitely adjustable and work extremely effi­ciently even in partial-load oper­a­tion.

Thanks to the state-of-the-art EC motor, the energy consump­tion and oper­ating costs can be signif­i­cantly reduced with the FanDrive DV280.

Replacing such large fans is often a problem because of the lack of space. Is it the same here?

We use an external rotor motor design, which allows for a much more compact unit than conven­tional internal rotor motors. This means that the entire fan unit requires less space, making trans­porta­tion and instal­la­tion much easier. For example, when combined with one of our centrifugal impellers, the motor is immersed in the impeller because it is mounted directly on the external rotor. Even large RadiPac fans in size 800 there­fore easily fit through normal doors. These compact plug-and-play units are deliv­ered fully assem­bled to the construc­tion site and are easy to install. Fan fail­ures are often caused by vibra­tions gener­ated due to the instal­la­tion condi­tions. By detecting this at an early stage, we can signif­i­cantly improve oper­a­tional reli­a­bility. That is why we have inte­grated a vibra­tion sensor. During commis­sioning, our customers perform a test start-up during which the vibra­tion levels over the entire speed curve are analyzed. If exces­sive vibra­tion veloc­i­ties are detected, the control soft­ware auto­mat­i­cally avoids these speed ranges during oper­a­tion.

Fan impellers with diam­e­ters of one or two meters are often driven by AC motors. However, by the time the next stage of the Ecode­sign Regu­la­tion for fans comes into force, many of these solu­tions will no longer meet the increased require­ments. The suit­able alter­na­tive will then be new high-perfor­mance EC external rotor motors that operate at high effi­ciency levels. »