Elsdorfer Molk­erei und Feinkost GmbH replaced the fans in the venti­la­tion system of their high-bay ware­house. The personnel were impressed by the effi­ciency and oper­a­tional reli­a­bility of the new FanGrids.

Quark, yogurt and vinai­grettes line Joachim Müller’s path as he walks through the high-bay ware­house of Elsdorfer Molk­erei und Feinkost GmbH, located 70 kilo­me­ters south­west of Hamburg. The building was constructed in 2011, and stores the company’s finished dairy prod­ucts on an impres­sive 4,500 pallets at a constant temper­a­ture of 5 degrees Celsius. Müller is the tech­nical director there. “We store perish­able goods here. That means that oper­a­tional reli­a­bility is very impor­tant to us. The ware­house must always be kept at a suit­able temper­a­ture, and there must not be any major fail­ures,” he says.

The previous venti­la­tion system completed this task reli­ably. Four large, direct drive fans each gener­ated an air flow of 62,500 m3/h while consuming 23 kW in power. This meant that the 1,000-square-meter building was always at a suit­able temper­a­ture. But at the begin­ning of this year, the energy manage­ment system was due for certi­fi­ca­tion according to DIN EN ISO 50001. The energy team at Elsdorfer is always looking out for the poten­tial for savings, but the venti­la­tion system was a sticking point for them. “Of course, the system is a major consumer, as it runs throughout the entire year.

The fans run for 24 hours, seven days a week,” says Müller. But at first, the parties involved were skep­tical as to whether replacing the fans would actu­ally bring about the desired energy savings. “The system was only nine years old, we couldn’t imagine that the tech­nology had devel­oped so much in that time frame,” says the tech­nical director.

From one to four

However, the company decided to try it out. After a consul­ta­tion with Dieter Hilde­brandt from Breuell & Hilgen­feldt GmbH, the deci­sion was made to replace one of the four fans first. Müller recalls: “To begin with, we wanted to see whether we could actu­ally make the antic­i­pated energy savings. For reasons of oper­a­tional reli­a­bility, we can only ever convert one venti­la­tion compo­nent at a time anyway, as the high-bay ware­house still has to be cooled in the mean­time.” With the aims of maxi­mizing reli­a­bility, improving air perfor­mance, and reducing the noise level, Dieter and his team devel­oped a FanGrid-based concept. This means that multiple fans are screwed into one wall. In the case of Elsdorfer Molk­erei, four RadiPac EC centrifugal fans were to replace the first of the four large fans. The new venti­la­tion system with a total of 16 RadiPac EC fans ensures that the prod­ucts remain fresh at a constant 5 degrees Celsius. (Foto: Jan Hosan | Fotogloria)

To manage this, it required some help from another large vehicle first. Dieter reports: “We used a 40-meter-long, 110-ton car crane to shift the first of the large old fans, which were stored outside the ware­house in system containers.” Compared with that, installing the FanGrid was much easier. The conve­nient size of the fan cubes meant that two installers were able to bring them into the container and screw them to a wall. They were also quick to connect to the system thanks to plug and play. This was an obvious advan­tage. After five days of removal and instal­la­tion work, the FanGrid entered into service, boasting a power consump­tion of 17.8 kW, an air flow rate of up to 75,000 m³/h, and a maximum pres­sure build-up of 900 Pa.

“As four fans now work together in one unit, we have improved our oper­a­tional reli­a­bility. If one fails, the other three will take over and keep the air volume constant.”

After the first fan had been in use for three months, one thing became clear to Joachim Müller and the team: the invest­ment was worth­while. Elsdorfer saved around 10,000 euros in energy costs, just by replacing the first fan. “We were honestly surprised that we could save that much energy as a result. We weren’t expecting that,” says Müller.

The FanGrid provided other bene­fits along­side its energy costs: “As four fans now work together in one unit, we have improved our oper­a­tional reli­a­bility. Thanks to the redun­dant design, it won’t matter if one fails, as the other three will take over and keep the air volume constant,” explains Müller. This is the key point for a ware­house with pallets full of perish­able goods. 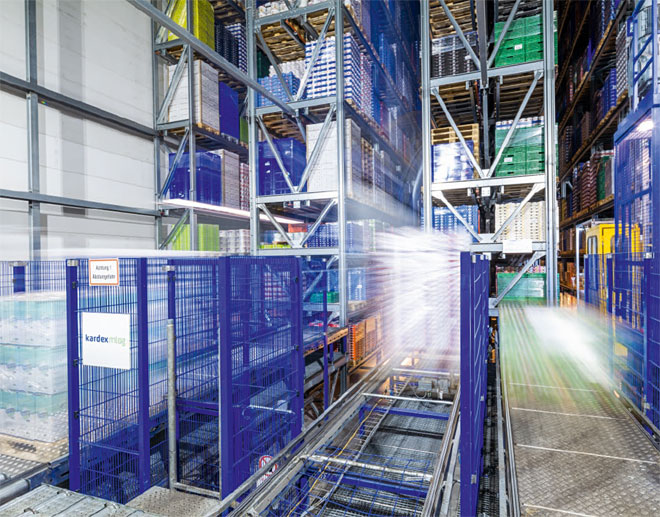 For a ware­house with pallets full of perish­able goods, oper­a­tional safety is a key issue. (Photo: Jan Hosan | Fotogloria)

He also notes the advan­tages when performing repairs on the venti­la­tion system. It will not be essen­tial to carry them out quickly. In fact, the repair personnel can take their time. Another posi­tive side effect is also a lower noise level. The replace­ment has decreased this by around 12 dB(A): “We are located in a mixed area, with busi­nesses along­side resi­den­tial prop­er­ties. So noise emis­sion is also impor­tant here,” says Müller. “And since the project went so smoothly and simply, we agreed that we should also replace the other three venti­la­tion units with FanGrids.”

The four fan walls, made up of a total of 16 RadiPac EC centrifugal fans, have now been in oper­a­tion since May 2020, keeping the yogurt, quark and other prod­ucts cool as per require­ments. While the old fans required a power output of 78 percent, the FanGrids achieve the same air flow at 50 percent. As a result, Elsdorfer makes two sets of savings – around 47,000 euros per year in energy costs, and 100 metric tons in CO2 emis­sions.

Smoothies with pieces of fruit, or dairy prod­ucts such as butter­milk and yogurt pose no problem for the ProMi­nent DULCO flex Control peri­staltic metering pump. It places the right amount in the pack­aging, even when it comes to viscose food prod­ucts – made possible by an EC drive.»