The art of air condi­tioning

ENGIE Services U.S., a divi­sion of global energy leader ENGIE, has a clear mission: helping its customers to save energy. It manages to do so at a large data center thanks to careful prepa­ra­tion and an eye for detail.

r Danielle Owen, sound plan­ning and detailed analysis are the essence of her work: key factors for the success of all her projects. Owen is Director of Busi­ness Devel­op­ment Engi­neering at energy service provider ENGIE Services U.S. (formerly OpTerra Energy Services). Her work consists of showing clients oppor­tu­ni­ties for saving energy in the manage­ment of all types of build­ings — whether involving air condi­tioning, lighting or heating. A project for a major oper­ator of colo­ca­tion data centers started with a detailed infra­struc­ture review. “Our client has data centers at over 40 sites throughout the US,” says Owen. “They wanted to know from us what measures would be the most worth­while, and where.” 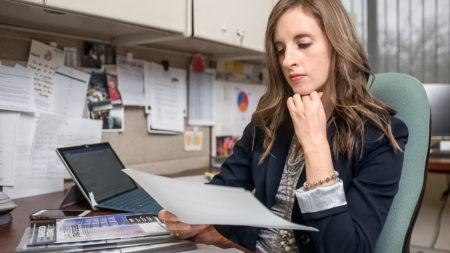 Danielle Owen of ENGIE Services U.S. knows: The air condi­tioning of a data center is an art in itself. (Photo | Jake Belcher)

Owen and her team set about analyzing elec­tricity bills, existing hard­ware and soft­ware config­u­ra­tions, and consump­tion data from all the computer centers. They compared this data against the energy prices and energy-saving programs in the different states. “There’s enor­mous vari­a­tion here, so it’s impor­tant to know exactly what rebates are avail­able for energy-saving projects in which states, and how to get them.” ENGIE iden­ti­fied three data centers where modi­fi­ca­tions for greater energy effi­ciency would espe­cially pay off, with one based in the US state of New Jersey. And then the work really got under way.

ENGIE collected further data on-site, taking a closer look at the existing hard­ware, as well as the control system. Proceeding on this basis, the company devel­oped a proposal that encom­passed a range of passive and active measures for cooling the data center, in addi­tion to replacing all lights. ENGIE backed up the entire plan with figures docu­menting the expected savings. “This step is partic­u­larly impor­tant on projects where we’re applying for rebates on behalf of our client,” explains Owen. “The entire proposal including all figures under­goes scrutiny by an inde­pen­dent third party ahead of the project. And even after approval of the subsidy, it will be paid out only when the savings are actu­ally achieved later on.”

“In our projects, we have to back up all measures with hard data of the expected savings. All numbers are checked for their accu­racy even after the project is done.”

Once the project had been autho­rized by both the client and the auditing agency, ENGIE’s instal­la­tion teams got down to busi­ness, imple­menting different measures in parallel. First, the lighting system throughout the data center was switched to LED lights. Improving the air flow through the center was a bit more complex. ENGIE made use of both active and passive measures here. Active floor tiles are each equipped with four EC fans, which selec­tively channel cold air from the under­floor at specific points to the server racks. (Photo | Jake Belcher)

The passive measures included setting up cold aisles and fitting barriers that were installed wher­ever partially filled server racks would other­wise result in gaps in the cold aisles. The most impor­tant active measure was the intro­duc­tion of so-called active floor tiles. These perfo­rated floor panels feature fan trays each equipped with four EC fans, which selec­tively channel cold air from the under­floor at specific points to the server racks. All told, 324 of these elements were installed by ENGIE in the data center.

“Control­ling the air flow through a data center is an art in itself,” explains Owen. “Partic­u­larly data centers with lots of customers result in a huge vari­a­tion in loads, which are also distrib­uted over the building’s foot­print. Investing in active floor tiles pays off here because they can be used to control the air flow far more precisely, allowing us to switch off consump­tion heavy air condi­tioners.” To make this process as effi­cient as possible, ENGIE equipped each floor tile with three temper­a­ture sensors which, like the Computer Room Air Condi­tioner (CRAC) units, are connected to the building control system. If the temper­a­tures measured by the sensors are lower than required, the fans in the floor tiles slow down. When a rack starts to get too hot, the fans in the tile speed up again. If this is not suffi­cient, a nearby CRAC unit is brought out of standby and supplies more cold air. “Installing extra energy consumers in the form of fans may initially sound like a contra­dic­tion if you want to save energy. But the active floor tiles func­tion so effi­ciently, using them really pays off,” explains Owen.

While one team of ENGIE’s tech­ni­cians was busy modern­izing the inte­rior of the data center bit by bit without inter­fering with ongoing oper­a­tions, another was hard at work on the roof. There they removed the fans in the condensers, replacing them with 224 energy-effi­cient EC fans featuring AxiTop diffusers from ebm-papst.
Owen comments, “One major advan­tage of this replace­ment was the ability of ebm-papst to supply us with fans tailored to the units. The company also deliv­ered small consign­ments of fans to the work site once a week. That was a great help as our client only gave us limited storage space on site.”

A home for servers

Colo­ca­tion data centers offer customers a way to install their own server hard­ware in an optimum infra­struc­ture. Compa­nies without a data center of their own can still store their data securely and on their own hard­ware. For the oper­a­tors of colo­ca­tion data centers, this busi­ness model means they need air condi­tioning systems that offer a fast, effi­cient and flex­ible response to different load levels.

Once all measures had been imple­mented, ENGIE’s staff remained on the spot for a few weeks to commis­sion the systems one by one and fine-tune them. “We adopt a succes­sive approach here, finding the optimum settings for all compo­nents step by step. We’re happy to spend time on this, because the details of the settings also decide whether oper­a­tion will be effi­cient.”

That there has been a marked rise in effi­ciency is demon­strated by the figures for the project at the data center in New Jersey: Annu­ally, the oper­ator is now saving 7.3 million kilo­watt hours. This means that the modi­fi­ca­tion work will pay for itself in less than two years. Thanks to the improved air flow at the data center it has been possible to put 53 of the 112 air condi­tioners into hot standby mode. Danielle Owen comments that aware­ness for improving effi­ciency is also constantly being rein­forced by such projects: “During the last five years, oper­a­tors have been thinking more and more about the effi­ciency of their data centers. Improving their effi­ciency also hits their bottom line directly, and in some cases, can free up capacity to serve more customers.”

The more infor­ma­tion that is avail­able, the easier it is to keep every­thing under control. Which is why the people respon­sible for upgrading the data center of the Canton of Zug decided on effi­cient fans with MODBUS inter­face.»