It comes when called, finds the shortest path to its destination, and connects with its fellow modules: the factory runabout KARIS PRO. 12 industrial and research partners are developing it. Project manager Andreas Trenkle from the Karlsruhe Institute of Technology tells us about its chances.

Mr. Trenkle, who needs a flexible transport system like KARIS?

Anyone who needs more flexibility for in-house transport. Automated logistics systems are not only expensive, they’re also inflexible and getting them up and running costs lots of time and money. So today many transports are still done by hand with dollies, stackers or milk run trains. KARIS PRO plans its routes on its own and transports its cargo to its destination autonomously.

Is anybody already using your modules?

We’re starting two pilot projects now. In Audi R8 production at its Quattro supplier, five KARIS modules get parts from the warehouse. A module drives under a box containing all of the parts needed for a certain production step, docks with it, and brings it to the assembly site at the correct time. If an entire pallet has to be transported, four modules combine to form a single unit.

At Bosch Diesel Systems, our modules transport parts from different production areas to and from a measuring room. It’s a big area extending over two buildings. A tow train used to do the job, making its rounds according to a schedule. Now our module comes when it’s needed and chooses the best route by itself. A taxi instead of a train, you could say. The advantage is that the workers get their materials sooner.

How do the modules know what they’re supposed to do?

Workers enter the orders on a tablet. All modules are informed via WLAN and negotiate among themselves about which of them will carry out an order; there’s no centralized control. Then the module with the shortest path to the destination and enough battery power takes the job. The KARIS PRO could also get its jobs directly from an SAP system or from RFID tags on the boxes instead of from manually entered jobs. The drive lifts the platform slightly when the vehicle picks up a pallet. (Photo | Martin Wagenhan) 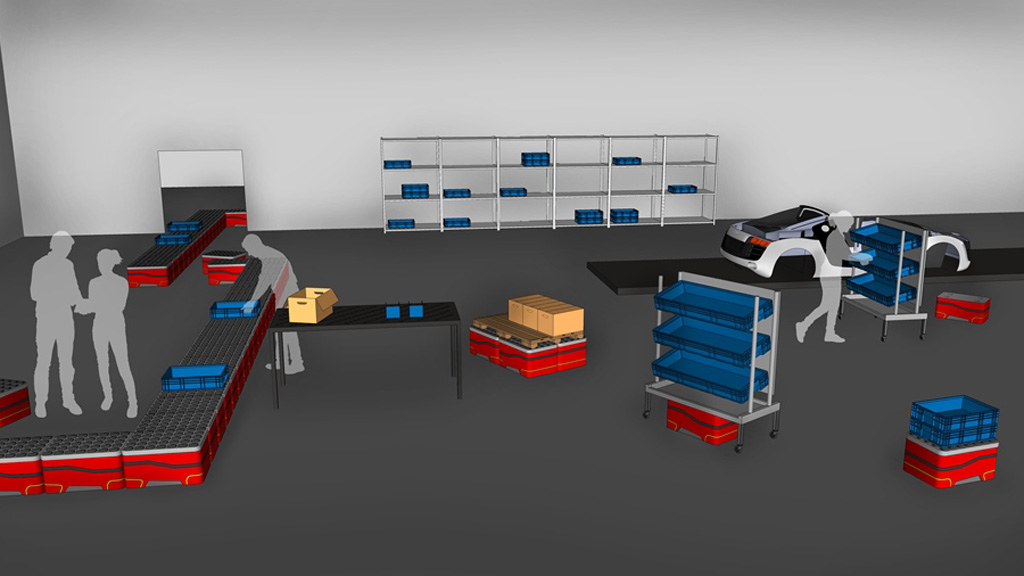 KARIS PRO plans its routes on its own and transports its cargo to its destination autonomously. (Illustration: Institute for Material Handling and Logistics) The complex drive units monitor themselves constantly, checking the speed and position of the steering drives. (Illustration: Institute for Material Handling and Logistics)

How do you ensure that your modules don’t bump into the shins of production staff?

KARIS PRO has a safety laser scanner that continuously sweeps the area in front of it — a sort of eye. With data from that, it can detect obstacles and drive around them. If an object such as a walking person is on a collision course, the module will stop immediately. The complex drive units monitor themselves constantly, checking the speed and position of the steering drives. So the module always knows how fast it’s going and in what direction. If it ever has to drive backwards, the drive’s motor currents are used for tactile detection of collisions. The drive notices as soon as it encounters an obstacle and then brakes immediately. This way we don’t need additional sensors.

What’s next for KARIS?

Things will really get interesting when our modules are used in a flexible production environment with machines that communicate with KARIS and tell it, “Bring me this, take that over there.” KARIS PRO should be able to deal with the dynamics and fluctuation of such a situation. We’re in discussions with businesses about industrializing and marketing KARIS PRO.

The automatic lawnmower from SABO and John Deere is making life easier for gardening enthusiasts. Thanks to ebm-papst, it is also quiet and efficient»

Making the most of EC drive output»