Networking and cooperation enables the companies in the “Hohenlohe Model” to improve their environmental credentials and to advance the region.

When plans were announced in 1991 to build a hazardous waste incineration plant in the Hohenlohe district, an action group was quickly formed. Local industry also supported the cause. To render the building of the plant unnecessary, 17 companies from the region, including ebm-papst, agreed to reduce their volume of hazardous waste by half within three years. This was the birth of the “Hohenlohe Model”.

Since it was first set up, the tasks of the network have changed considerably. Kurt Weissenbach, Chairman of the association, describes the activities of the group: “We help our 180 members to help themselves. On the one hand, we provide support for various projects. On the other hand we have formed internal working groups that deal with the issues of waste, the environment and energy.” For example, the association makes an exchange possible between students and companies. It supports the introduction of environment management systems and assists companies in attaining environmental certification. The association sees itself as a learning network. The objective is to network know-how in order to efficiently realise corporate environmental protection. General manager Jutta Bauer does not only see the cost factor here: “We have seen many cases that demonstrate that environmental protection can also make economic sense.”

The companies pool their ideas regarding sustainable economy and in doing so do not just advance the region, they also assume a national role model function. That can be seen, for example in the country’s very first energy efficiency roundtable. In 2002, ebm-papst and 16 other companies decided to cooperate in order to achieve common objectives with respect to saving energy and reducing CO2 emissions. A project engineer and a moderator supported the companies and gave impetus for the exchange of experience. Company representatives meet three to four times a year at one of the member companies to gain an on-the spot picture of efficient implementation. Personal contacts were quickly established. “When a project like this runs for two years, the people involved get to know each other so well that they call each other directly instead of asking the moderator first,” confirms Weissenbach.

Following the success of this approach, similar schemes are springing to life all over Germany. The Hohenlohe Model is a partner of the “30 Pilot Networks” project of the Federal Ministry for the Environment, which is helping to set up further energy efficiency roundtables in other regions. Here, the association is able to input its own experience and advise other companies and regions. These can benefit from the knowledge of their colleagues. And that is entirely in keeping with the network’s slogan: “No need to reinvent the wheel.” 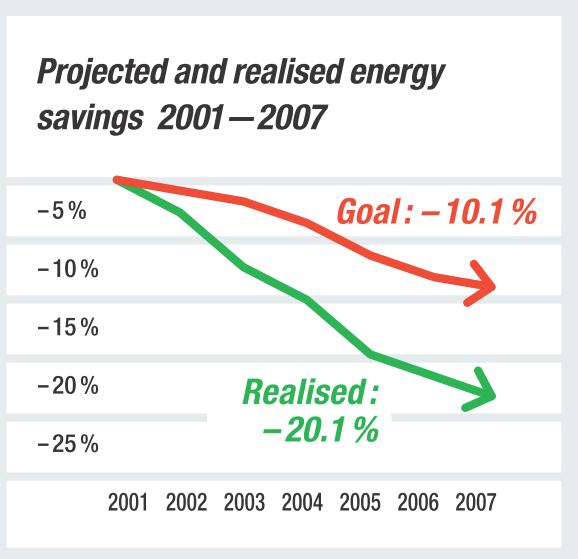 The Energy concept
Nine of the companies that participated in the “Energie-Effizienz-Tisch”, an energy efficiency roundtable, had set the goal of 9 percent energy savings over six years for themselves in 2001. In 2007, 20.1 percent were actually achieved. This corresponds to average savings of 110,000 euro per year and company or a reduction of CO2 of 15,000 tonnes. The values are production and climate-corrected.