Centrifugal fans from ebm-papst set new stan­dards: Thanks to aero­dy­namic opti­miza­tions, inno­v­a­tive mate­rials, sophis­ti­cated design details, and highly effi­cient EC motors with intel­li­gent control elec­tronics, they not only deliver signif­i­cantly more air perfor­mance than before, but they are also partic­u­larly quiet and effi­cient.

For some time now, motor and fan specialist ebm-papst has been employing a contin­uous improve­ment process in fan tech­nology. In recent years, the centrifugal fans in the RadiPac series specially designed for use in air condi­tioning and venti­la­tion units have been constantly opti­mized, with partic­ular emphasis on energy effi­ciency, noise reduc­tion, and handling. With the new RadiPac, it has been possible to make another deci­sive improve­ment in this successful series. The new-gener­a­tion centrifugal fans work with higher effi­ciency levels (Fig. 1). Higher speeds ensure a higher air flow and higher pres­sures, meaning that even high-pres­sure appli­ca­tions can be covered (Fig. 2). The static pres­sure increase that can be achieved is well over 2000 Pa. In addi­tion, noise gener­a­tion has decreased further; depending on the oper­ating point, the noise level is reduced by between 3 and 7 dB(A) compared to the prede­cessor series. Fig. 2: Increase in power density in the new RadiPac compared to the prede­cessor series. (Graphic | ebm-papst)

To bring about this opti­miza­tion, the impeller plays an impor­tant role. It has been devel­oped according to the latest aero­dy­namic find­ings with its five geomet­ri­cally sophis­ti­cated impeller blades (Fig. 3). A high-strength, glass-fiber rein­forced composite mate­rial is used here. The complex shape is made possible by the injec­tion molding process used. This blade geom­etry dras­ti­cally reduces flow losses. The rounded flow contour at the blade inlet and the blade trailing edge, which tapers toward the back, contribute to this. The wavy cover plate leads to an optimal air flow rate through the impeller. The inlet ring is also made of composite mate­rial and is designed for perfect inter­ac­tion with the new impeller. The sophis­ti­cated impeller geom­etry not only reduces flow losses, but also noise gener­a­tion. When it comes to its strength, the mechan­ical design of the impeller also impresses. The edges on the intake and outlet sides are counter-curved, which increases the impeller’s stability. High periph­eral speeds are there­fore easily possible and, depending on the impeller diam­eter, they result in corre­spond­ingly high speeds. This has been proven under harsh condi­tions in exten­sive stress and long-term tests. They can be oper­ated at maximum speed in a temper­a­ture range from -25°C to +40°C. Here, the tried-and-tested indus­trial composite mate­rial meets all the rele­vant stan­dards, and UL approval is also avail­able if required.

The driving force behind the new RadiPac centrifugal fans are high-effi­ciency Green­Tech EC motors in the power range from 500 W to 8 kW. The inte­grated EC motors with external rotor design achieve effi­ciency levels in accor­dance with the require­ments for effi­ciency class IE5 set out in IEC/TS 60034-30-2. For reasons of system effi­ciency, the drive system consisting of motor and inte­grated power elec­tronics is indi­vid­u­ally adapted on each fan, and is opti­mized for the respec­tive oper­ating range. The newly devel­oped 8 kW drive sets new stan­dards.

The perfor­mance of the inte­grated elec­tronics has been increased again, even with its more compact dimen­sions.

The perfor­mance of the inte­grated elec­tronics has been increased again, even with its more compact dimen­sions. This makes the drive the most powerful in its class at present. Design and func­tion­ality have also been updated to the latest gener­a­tion, and upgraded to include a config­urable inter­face – including the MODBUS-RTU inter­face and inte­grated reso­nance sensor (see text in box). This reso­nance sensor measures oscil­la­tions and vibra­tions in real time. It can there­fore detect imbal­ance due to dirt, for example, and then transmit a message before the fan is damaged – in keeping with the Green­In­tel­li­gence philos­ophy.

To meet the require­ments of different instal­la­tion situ­a­tions, the new centrifugal fans are avail­able in a stan­dard and short version (Fig. 4). With the most powerful stan­dard types, the impeller is attached to the motor in such a way that it has no nega­tive influ­ence on aero­dy­namic effi­ciency. In the short version, the motor is immersed in the impeller. These fans are more compact and are much more effi­cient than compa­rable prede­cessor models in spite of the slightly shorter axial instal­la­tion dimen­sions in compar­ison to the stan­dard version. Fig. 4: In the stan­dard types (left), the powerful motor is completely pulled out of the flow area. In the short version (right), the motor is immersed in the impeller. (Photo | ebm-papst)

Both RadiPac versions are avail­able as a motor-impeller combi­na­tion or as a ready-to-install plug & play solu­tion in a compact support bracket for easy wall mounting (Fig. 5). The support plates have been dimen­sioned to make the best possible use of space on a Euro pallet, thereby saving trans­port costs and improving the CO2 foot­print. A completely enclosed Flow­Grid air inlet grill is also avail­able as an option. This acts as a kind of recti­fier that reduces noise-gener­ating turbu­lence in the inflow without changing the air perfor­mance and power consump­tion. It also serves as a guard grill for the intake side. The fans are then even quieter, which bene­fits venti­la­tion appli­ca­tions as well as many others. Fitting dimen­sions – suit­able for a retrofit

Retro­fitting is normally possible without design modi­fi­ca­tions in the appli­ca­tion, as the new fans are geomet­ri­cally smaller when it comes to the same model size despite their higher perfor­mance. From October 2021, the new centrifugal fans will be avail­able in model sizes 310 to 630 with air perfor­mances of up to 20,000 m³/h and a static pres­sure increase to over 2,000 Pa. Samples are avail­able with imme­diate effect upon request.

In the next step, there will also be FanGrid vari­ants in the series. This cubic housing allows several fans to be arranged next to or on top of each other to make the best use of the avail­able instal­la­tion space. With this devel­op­ment, ebm-papst is showing that there are always new approaches to signif­i­cantly improving energy effi­ciency, air perfor­mance, and noise gener­a­tion.

Centrifugal fans are used in a wide range of appli­ca­tions. Depending on the instal­la­tion situ­a­tion, there may be reso­nance in unfore­seen speed ranges. If the fan is often oper­ated in such crit­ical ranges, the drive motors’ bearing system may be damaged, leading to fan failure. For system oper­a­tors, these vibra­tions can be measured but are not easy to suppress. In its RadiPac centrifugal fans, ebm-papst solves the problem with an auto­matic reso­nance detec­tion func­tion that mini­mizes the effect of vibra­tions.

A test start-up is carried out during commis­sioning in which the vibra­tion levels over the entire speed curve are recorded and analyzed. If exces­sive vibra­tion veloc­i­ties are detected in specific ranges, the control soft­ware auto­mat­i­cally sets itself to “fast-forward” through these speed ranges in the future (see Fig. 6). In this way EC centrifugal fans can be oper­ated without risk of damage. Oper­a­tors can manu­ally edit the soft­ware settings at any time and always have full control. 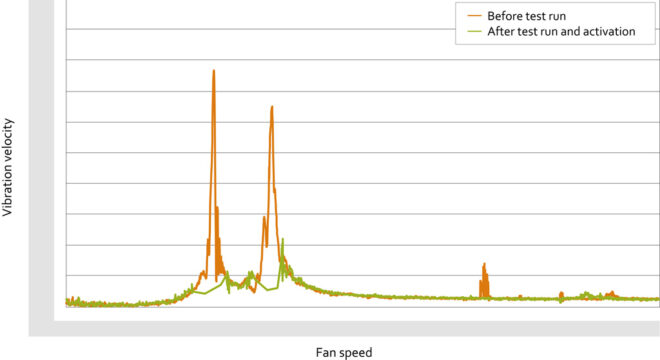 The ZeitHaus museum in the heart of the Autostadt (car city) in Wolfs­burg is a place that motorists long to see. On five floors of the exhi­bi­tion area, there are row after row of vehi­cles – each more fasci­nating than the last. Retro­fitting the venti­la­tion ensures the right atmos­phere for people and cars.»