From building heating systems to building hotels: Robert Rentzsch talks about the role of energy effi­ciency in his Abasto project

You are a heating engi­neer by trade. What prompted you to build a hotel?

At the begin­ning, we had actu­ally planned to build a ware­house for our heating engi­neering busi­ness. At the same time, however, we wanted to do some­thing for our home­town of Gern­linden. In the process, we thought about various options for how we could make addi­tional use of the land. Possi­bil­i­ties included a youth centre, an ice cream parlour, and even an Italian restau­rant. In the end we settled on a hotel. The single-storey building that we orig­i­nally planned ended up as two storeys. 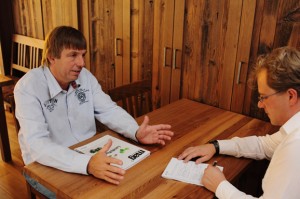 How long did it take to get from plan­ning to imple­men­ta­tion?

The actual construc­tion took only ten months, which was very ambi­tious. But it took two years total to get from plan­ning to comple­tion. The devel­op­ment and plan­ning phase took about half of that time.

Did you include the heating and cooling system in your plans from the outset?

As a heating contractor, of course, I am very much aware of these topics and looked for an energy-effi­cient solu­tion from the outset. Before­hand, Kamp­mann showed me rele­vant hotel projects that use the company’s tech­nology. Before then, I had mostly worked with Kamp­mann in the floor convector area – that goes back many years.

What is the greatest chal­lenge in a hotel?

The flex­i­bility. The system has to be able to start up extremely quickly. A floor heating system, for example, is not versa­tile enough for this appli­ca­tion. There­fore, I decided on the system from Kamp­mann, as it meets the spec­i­fied require­ments.

And saves a great deal of energy in the process, right?

Exactly. That was defi­nitely the crit­ical factor that made me decide in favour of this solu­tion. Energy costs in partic­ular are a consid­er­able cost factor in a hotel.Therefore, from the begin­ning, my fore­most priority was keeping the oper­ating costs low. I was drawn in by the fact that the heating or cooling orig­i­nates at the same place it is used, rather than centrally. Thus no energy is lost along the way to the desti­na­tion. Another appealing feature of the fan coils is their very quiet perfor­mance. This also keeps hotel guests happy.