Bus for employees: All aboard

Earlier a necessity, today a special service: the ebm-papst shuttle bus takes employees to work from all across the district

A company in the countryside is sometimes faced with particular challenges. For example the question of how the employees get to work. But the resourceful company in Hohenlohe has a solution for every problem. To help recruit staff in this rural area, ebm-papst set up a shuttle bus service in 1963, initially using the company’s own minibuses. That meant that the distances between the company’s base at Mulfingen and the scattered villages of the district were no longer a problem, even for those who did not have their own vehicle – which was commonplace back then. In 1975, the first factory-owned bus started service. At peak times, the fleet was expanded to eight company-owned buses. A service that was started as a small thing is a permanent fixture for many today.

The twelve buses drive an average of more than half a million kilometres around the district. At 128 bus stops within a radius of 25 kilometres from Mulfingen, they pick up a total of around 1,200 ebm-papst employees working in three-shift operations, and take them safely and cost-effectively to work. Nobody has far to walk, for the bus stops are all just two and a half kilometres from one another. To keep the shuttle bus service affordable, ebm-papst works with subcontractors and the local public transport operators in three districts.

Knowing how to help yourself

25 years ago, Karl Hofmann, a bus driver in the very first days, picked up his passengers in a 39-seater. The bus was operated consecutively on two routes: Schrozberg and Krautheim – and the passengers were predominantly female. “The personal contact was the nicest part,” remembers Karl Hofmann. The travelling community was always relaxed, especially in the winter, when it was difficult to get to Mulfingen on time. “In those days, nobody had a mobile phone. If we got stuck in snow, or if we couldn’t get any further because of icy conditions, we had to send somebody home to let the company know. And once, everybody got out and skated on. Some of them in their stocking feet. That’s how icy it was!” 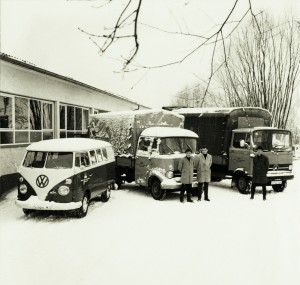 Starting in 1963, minibuses from the company’s own feet brought employees to work

Cost-effective for everybody involved

Joachim Ruck, head of logistics, explains the fact that the shuttle service remains so popular with rising energy prices, amongst other factors. “Our employees see the buses as an interesting alternative to their own cars.” Today, ebm-papst only has one bus of its own. “In terms of capacity utilisation and costs, our collaboration with public partners is beneficial for everybody involved, especially for our staff,” explains Joachim Ruck. Business is skilfully combined with the pleasure. Maximum capacity utilisation for the good of social commitment to the region. For example, the shuttle service is also used for the regional “Youth research” competition, for excursions for local clubs and associations, for children’s holiday activities and of course at the ebm-papst marathon. But the shuttle service also has another pleasant side effect: environmental impact is reduced – and that is something else that is important for the company in the countryside.