Cell phones have made phone calls possible from any loca­tion, but the Finnish designer Antti Evävaara is bringing back the phone booth  —  and putting it in open-plan offices.

The boss is talking loudly into her phone, the secre­tary is having a laugh with a customer, and the coworker across the way is banging away on his keyboard — just about every­body knows such situ­a­tions from open-plan offices. Phoning in such surround­ings, and espe­cially in privacy, is just about impos­sible. The only solu­tion is to head for a phone booth.

No, not the tradi­tional phone booth that is only rarely found on the side­walk anymore. These phone booths are true designer items for the office: the Silence Phone Box and the Silence Stand Box from Evavaara Design, the product line by the Finnish designer Antti Evävaara. His Pesä chair with five legs made it into the Design Museum in Helsinki and made Evävaara famous in the 1980s. Evävaara has been making the Silence line of furni­ture since 2002, offering places of refuge in airports, hotels, libraries and open-plan offices.“Now with every­body having a cell phone and open-plan offices in fashion, people need resting areas where they can read, phone or work in peace,” says Evävaara. “That’s why I design acoustic furni­ture that leaves the noise outside.”

He started with the Silence Chair, of which there are 70 at the Frank­furt airport. With its curved shape, roof and safety glass, the chair shields the user completely from ambient noise, and the user’s voice cannot be heard by people outside. “The chair isn’t optimal for longer phone calls, so a few years later I designed the Phone Box for open-plan offices.”

Four walls and a door shield the user, and a chair and a table round out the work­space. On request, Evavaara Design also inte­grates a video­con­fer­encing system. All of this makes the Box perfect for working in peace for long periods — when the air is good.

“The CO2 level in the Phone Box can’t be allowed to get too high, or people will get tired and can’t concen­trate,” says the designer. So there are fans on the Box to exchange the air regu­larly. But no tests were performed to verify whether the fans were strong enough to keep the CO2 level down. That changed when a big order mate­ri­al­ized.“ ...and fabrics for their prod­ucts. (Photo | Matti Immonen) They can select mate­rials  from wool to leather for the  high-quality furni­ture. (Photo | Matti Immonen) At the begin­ning of the year, Antti Evävaara contacted us and asked us to measure the CO2 level in the Silence Phone Box,” recalls Jukka Blåfield, tech­nical director at ebm-papst Oy in Finland. He knew the company from a joint effort to develop a glass compart­ment for smokers, which failed due to regu­la­tions. “We used a sensor to deter­mine how air quality changes when a person sits in the Box for a while. We noticed that the fan’s air flow was insuf­fi­cient because the carbon dioxide level rose too much over time.”

“The air is exchanged completely within a minute, and you don’t even notice it.”
Antti Evävaara, Inventor of the “Silence” furni­ture and managing director of Evavaara Design

So ebm-papst replaced the AC tangen­tial blower with a stronger RadiCal centrifugal fan. “We adjusted the EC fan’s air flow so that the air quality was good but its noise level was as low as possible,” says Blåfield. Evävaara borrowed the sensor, tested the new fan a bit more, and then decided to inte­grate it into the Silence Phone Box. 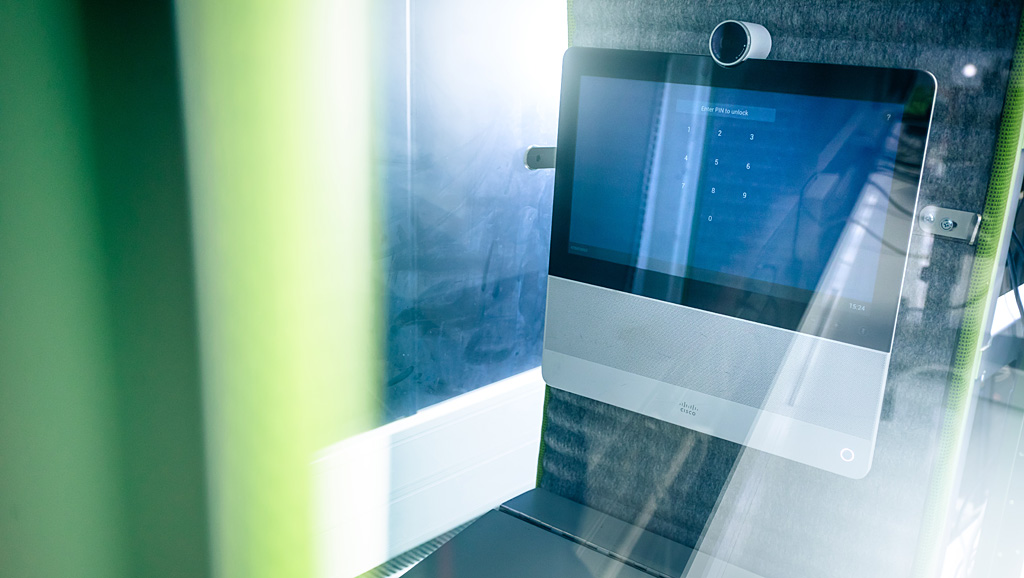 He also uses the centrifugal fan in his latest product, the Silence Stand Box, which is designed for short phone calls made while standing. “The air is exchanged completely within a minute, and you don’t even notice it,” says Evävaara proudly. And so people can stay produc­tive longer.

From wool to leather

The Silence Phone Box has been installed in the offices of Finnish real estate agents, in law prac­tices where confi­den­tiality is oblig­a­tory, and in open-plan offices at Google in London and Paris. “The ones at Google are blue outside, have a red seat, and yellow and green handles,” says Antti Evävaara. The designer considers it impor­tant that the Boxes are not merely func­tional but are also high-quality furni­ture. “The customers can select the mate­rials — from wool to leather — and colors for the Phone Box them­selves,” he says. Many different kinds of wood are used for the Stand box.

Evävaara has designed six different Silence prod­ucts for various purposes. All have one thing in common: They promote harmony where many people come together, and they make our loud world a little quieter.

Constant volume plays a major role in many appli­ca­tions, but in resi­den­tial venti­la­tion it’s essen­tial.»