Self cooler: A crafty draft

In the Saarland, wind-power stations are being developed and built that are reliable and set new standards with self-cooling forces — using EC technology.

Alone on the hill, the rotor of a wind-power station is rotating at a height of 69 metres. There’s quite a breeze blowing over Sitzerath in the north of Saarland. The screen of the installation control system indicates a wind speed of between 5 and 15 metres per second. Inside the steel tubes, that sounds like the groaning of a heavy worker. However, the humming is the satisfied sound of one of the lean giants rotating almost at its rated speed, known by the name of VENSYS 62 — the prototype from VENSYS Energy AG set up in 2003.

Our landscape is no longer conceivable without wind-power stations. However, they are not uncontroversial: too loud, too much shadow, too ugly is the criticism of many action groups and local communities. Yet beside these objections, wind-power stations provide great advantages: safe, almost environmentally neutral — and easy to maintain, being designed for longevity. “We simply left out much that could break”, explains Tanja Maringer succinctly. The stations, which are being developed in the Saarland, are simple, durable and reliable and will soon also be produced at the new location in Neunkirchen.

The core of the gearbox-free wind turbine, of which the prototype was tested in Sitzerath, created a new state of the art, innovative generator technology. The generator is based on permanent magnet technology, which already existed for electric drives, but was now put into use for wind-power stations as well. With this external rotor motor generator, a charged field is created by permanent magnets made of neodymium-iron-boron. The main feature of this technology is that wear parts and susceptible additional components, such as collector rings to transfer the generated power, have been eliminated. The generator is perfectly protected against environmental influences. In addition, the power for the generator itself is saved, making it fully available as energy output — the electrical efficiency is outstanding.

With conventional technology, using a gearbox between rotor and generator, the power train is subject to extreme stress. In the worst case, the gearbox needs to be replaced after five to ten years — an expensive measure. The new gearless robust technology makes the VENSYS system, which is designed for a service life of twenty years, a low-maintenance and reliable alternative. The technology shows some amazing parallels with the EC motor developed by ebm-papst. Here too, a brushless, external rotor motor actuated by permanent magnets foregoes the need for components that wear and at the same time offers decisive advantages: simple controllability, durability, compactness — and up to 90 percent efficiency. 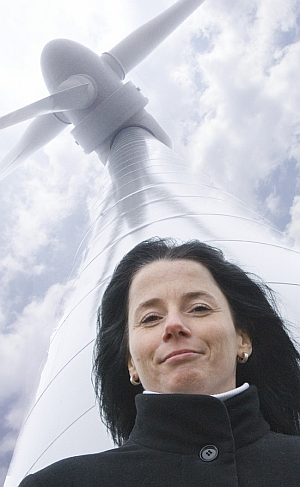 „Tanja Maringer knows
for sure: “To think green means to think economically.”

The gearbox-free technology in the wind-power station challenged the creativity elsewhere on the part of the developers, too: “We needed a suitable frequency inverter to transfer the electricity generated to a constant voltage and frequency”, explains Maringer, adding that the VENSYS frequency inverter is made by a subsidiary in Diepholz. A large number of semiconductors work in this frequency inverter — and they get hot, just like the transformer, which is also accommodated in the base of the tower.

At this point, VENSYS and ebm-papst came together: “VENSYS approached us about the development of component cooling in the tower base”, recalls Winfried Schäfer, Regional Sales Manager at ebm-papst. About five years ago, the then Manager of the Electrical Department, Dr. Stephan Jöckel, had a groundbreaking idea:

Why not use the clean, cool air available at the top of the tower to cool the frequency inverter and transformer in the tower base, and the generator? However, a stimulus was required. This was now provided by an EC axial fan in the tower door. The EC fan in the tower base generates a slight underpressure, which is sufficient to draw the air flow down through the entire tower to the base — a kind of reversed chimney effect. The air mass flow is directed via a distributor on the inverter cabinet to the air-conditioning components of the PCBs inside — which also accommodate further ebm-papst EC fans. Behind and below the inverter cabinet, the air is drawn further to the transformer and finally blows warmth out of the tower base, making this an extremely economical system of self-cooling forces. In addition, in the forth coming WPS generation, the EC axial fans will be equipped with HyBlade® blades. They combine the stability of a high-strength aluminium alloy with the light weight and unlimited mouldability of fibreglass-reinforced plastic.

He who thinks green thinks economically

Yet one might think that who ever is at the source need not necessarily save energy. However, Tanja Maringer disagrees: “He who thinks green thinks economically.” For the Renewable Energies Law (EEG) guarantees the operators a fixed supply payment of currently 9.2 cents per kilowatt hour. With an investment sum of approximately 2 million Euro per installation, the use of energy-efficient components is absolutely worthwhile. “We are therefore concerned that our installations themselves use as little power as possible”, concludes Maringer. Previously, we did not directly approach potential operators with these competitive advantages, as the company acted primarily as a licenser. In the past five years we have gained licensees in the Czech Republic, Spain, India, Brazil and above all in China. Meanwhile, 270 installations are operational worldwide, but the Chinese partner alone is planning a further 1,000 installations this year. Since the start of this year, VENSYS has been producing at the new company headquarters in Neunkirchen itself. First of all, the 20 installations planned for 2009 will be produced by order for the German and European markets. 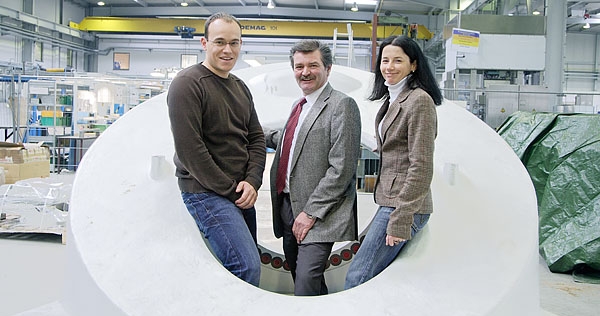 At the new site in Neunkirchen the future shines bright: in the new workshop production is starting off — viewed by engineer Mike Becker, Winfried Schaefer of ebm-papst and Tanja Maringer (left to right)

When the wind energy research group was founded at the Saarbrücken College of Technology and Business in 1990, nobody realised that just ten years later there would be a successful spin-off. For after the group had successfully developed a gearbox-free wind turbine with an output of 600 kilowatts for the company GenesYs, five members decided that they could themselves develop and construct installations. In the year 2000, therefore, the company VENSYS Energiesysteme GmbH & Co. KG was founded in Saarbrücken, with the prototype VENSYS 62 which has an output of 1.2 megawatts. The young company won its first licensee: the firm Goldwind in China, which today with 70 percent is the largest shareholder. Over the following three years, a further installation type with an output of 1.5 megawatts and four more licensees were added. In 2007 the company changed its name to VENSYS Energy AG. In 2008 the subsidiary VENSYS Elektrotechnik GmbH in Diepholz started with production of the self-developed frequency inverter. In August 2008, the 40 employees moved from Saarbrücken to Neunkirchen and started their own production with ten new employees. By the end of 2009 it is intended to double this number and to have built 20 installations.