The fans in the air condi­tioning system at the River­side Centre, one of Brisbane’s land­marks, were wearing out. A retrofit was needed to improve effi­ciency and conve­nience, but there was hardly any room and not much time.

With its wavy contours, glass-fronted lobby and unique view of the Bris­bane River, the 146-meter-high River­side Centre is a land­mark in the capital city of the Australian state of Queens­land. The skyscraper’s 40 stories are home to numerous offices and to cafés and restau­rants on the river­front that are popular desti­na­tions for locals and visi­tors alike. A listed building in the heart of the finan­cial district, it was designed by the renowned archi­tect Harry Seidler and completed in 1986.

After more than 30 years, the building’s façade was still gleaming like new but the orig­inal centrifugal fans in its air condi­tioning system were wearing out. “The bear­ings were damaged and starting to stick, the belts and pulleys were worn, and there were signs of pitting corro­sion on the impellers,” says Andrew Pren­tice, a mechan­ical engi­neer and consul­tant for the project team. A retrofit was planned to extend the life of the air condi­tioning system and improve its energy effi­ciency and customer conve­nience.

The orig­inal plans called for replacing the back­ward-curved dual centrifugal fans in the six cooling units with larger EC plug fans with diam­e­ters of 800 and 900 millime­ters. But ebm-papst Australia proposed installing smaller fans with a diam­eter of only 500 millime­ters instead, which would simplify trans­port and instal­la­tion. “It would have been pretty unre­al­istic to put a crane in a building in the middle of Brisbane’s finan­cial district,” says Andrew Pren­tice. Part of the upgrade involved installing larger and more powerful heat exchangers, which reduced the amount of space avail­able for installing the fans. “So we had to mini­mize the size of the fans while increasing their effi­ciency,” says Brett Saun­ders, CEO of the instal­la­tion firm Hiflow. 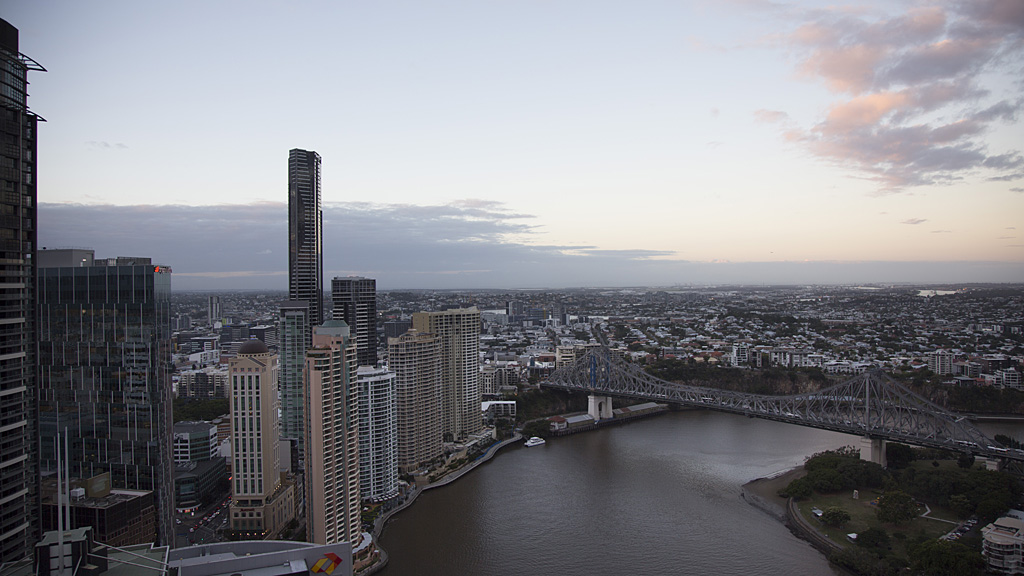 The unique view of the Bris­bane River makes the River­side Centre a land­mark in the capital city of the Australian state of Queens­land. (Photo | Steven Pam/Smartshots) Hiflow replaced one large back­ward-curved dual centrifugal fan with up to ten EC plug fans from ebm-papst arranged in a two-by-five fan grid. The small fans were trans­ported to the instal­la­tion site by pallet jack and freight elevator. Only two tech­ni­cians were needed to install the fans. That made a quick retrofit possible, an impor­tant factor for the customer. The tech­ni­cians were only able to start replacing the cooling units on Friday evening after work; all cooling units were to be replaced and running by Monday morning when the office staff returned to their desks. “We were actu­ally done with the retrofit on Saturday,” says Saun­ders proudly.

The new, smaller fans consume 38 percent less energy. With an air condi­tioning system that accounts for 60 percent of the building’s energy consump­tion, that makes a huge differ­ence for every one of its office tenants. Not only does the River­side Centre gleam on the outside, it’s now also a star in Australia’s NABERS envi­ron­mental rating system, receiving five-and-a-half out of six possible stars for its envi­ron­mental perfor­mance.