Drafty churches and shiv­ering worshipers? There is a better way. The heating special­ists at Mahr produce an indoor climate that is comfort­able for worshipers and good for historic struc­tures.

From a tech­nical point of view, the Aachen Cathe­dral is hell to heat,” says Jürgen Reinecke with a smile as he stands in the chancel and points up at the imposing building’s innu­mer­able stained-glass windows. In 1470, the chancel was built onto the orig­inal octagon, which dates from 812. “These two struc­tures are actu­ally a very poor match.” On the one hand, the massive, thick walls that take no notice of whether it is summer or winter outside; on the other, the chancel with 1,000 square meters of windows where the temper­a­ture drops every night. That invari­ably leads to drafts  —  exactly what Jürgen Reinecke is supposed to prevent.

At Theod. Mahr Söhne GmbH in Aachen, he is respon­sible for plan­ning church heating systems, which has been one of the family-owned company’s main lines of busi­ness since 1871 and involves some very special require­ments. “A church isn’t like a new three-room house that you just install a few radi­a­tors in,” says Reinecke. “Churches pose very special prob­lems, and for every church there’s a different solu­tion.” ... the company archive with infor­ma­tion about jobs from the last hundred years. (Photo | Ralf Kreuels)

In prin­ciple, heating works the same way in many churches, with hot air flowing from a central heating unit through a duct system in the floor to an outlet into the church. It returns to the central unit in the boiler room via recir­cu­la­tion inlets. Gravity used to be respon­sible for making that work, meaning the warm air had to flow into the church and back to the heating unit under its own momentum.

The result, according to Reinecke, was usually unsat­is­fac­tory since it was impos­sible to uniformly distribute the warm air inside the church using this tech­nique. Since the 1960s, Mahr has there­fore been using fans in its systems to direct the air more precisely through the floor grates into the church, and extract it again. 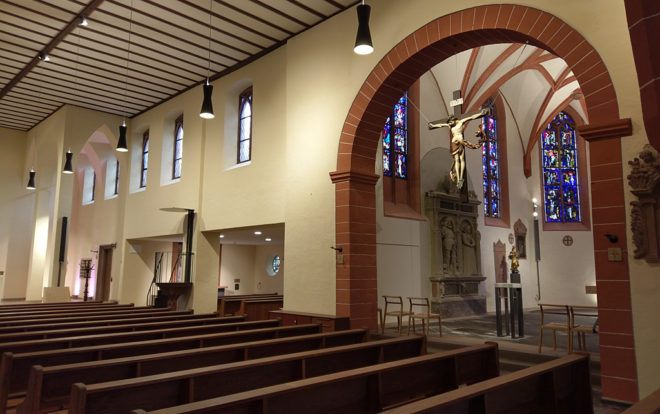 Heat for St. Vitus in Heidel­berg

Mahr used two solu­tions for the heating system over­haul at the St. Vitus church in Heidel­berg. A hot-water air heater provides central heating for the church room added in 1933 and 1934. High-perfor­mance RadiPac fans from ebm-papst ensure that the heated air is distrib­uted reli­ably. The Aachen-based company installed a Mahrcalor heating station in the side chapel; it heats this part of the church locally with sepa­rate connec­tions and controls. (Photo | Theod. Mahr Söhne GmbH)

The hot-water air heater installed in the cellar supplies heat to the church through ducts and floor grates.

Valu­able fres­coes
Problem: in the coldest part of the church, danger of damage from mois­ture
Solu­tion: prepared for later instal­la­tion of a Mahrcalor heating station The Aachen-based company has devel­oped several prod­ucts specif­i­cally for its church clien­tele, including hot-water air heaters, Mahrcalor heating stations, and light stations that filter the soot from votive candles directly out of the air. “Our hot-­water air heaters are actu­ally an improve­ment of what we’ve always made, air heaters with a central unit but, in contrast to conven­tional church appli­ca­tions, with a hot water-air heat exchanger,” says Reinecke.

They are used as pure heating units in churches. A fan circu­lates the intake air, routing it to the boiler room and blowing the heated air back into the church.

“When we reworked our product line three years ago, of course the ques­tion of the appro­priate fan came up,” recalls Reinecke. Winfried Schaefer, regional sales manager at ebm-papst, convinced him of the advan­tages of RadiPac EC ­centrifugal fans, which have since been built into Mahr’s hot-­water air heaters.

The contact with ebm-papst began in the 1980s during the devel­op­ment of the Mahrcalor heating station, a compact heating station that is embedded in the church floor; only the grate through which the air flows into the church is visible. “In addi­tion to fans and filters, these units contain a lot of elements for acoustic insu­la­tion. After all, we’re in a church here and people don’t want to hear noisy machinery during the services,” says Reinecke with a laugh.

The heating stations are distrib­uted throughout the church for uniform heat input — in the nave and the aisles, and also in the chancel. Initially the heating stations worked with only one fan; later Mahr began to use several smaller fans, which helps to estab­lish an even more uniform temper­a­ture distri­b­u­tion inside the church.

Now more fans and longer floor grates combine to provide pleasant condi­tions inside the church. “Depending on size, we now have two to six fans in use. ebm-papst is well posi­tioned there,” says Reinecke. The centrifugal fans draw in the air, blow it through a filter into the Mahrcalor station, and bring the heated air back into the church.

Some­times it takes a subma­rine

So every­thing is stan­dard and easily installed? Far from it. “In churches we have to make do with the condi­tions as we find them and fit our equip­ment into the existing infra­struc­ture, very much on a case-by-case basis and some­times just like in a subma­rine.” Producing its prod­ucts itself is an advan­tage for Mahr. As Reinecke says, “We have access to all compo­nents, so we modify them quickly and easily. That makes us flex­ible.” The hot-water air heaters have to fit into the existing boiler rooms in the churches. In a squeeze, Mahr makes indi­vidual elements fit. (Photo | Ralf Kreuels) The heated air reaches the church inte­rior through grates in the floor. (Photo | Ralf Kreuels)

If stan­dard sizes do not fit in the boiler room, Reinecke and his team make them fit. Besides, the units can be almost completely disas­sem­bled. “There’s a limit to how far you can go with a fan; it has to fit through the door. But we can modify all of the other struc­tural elements.”

Since customized solu­tions also call for specific advice, Mahr has estab­lished a Germany-wide sales network to advise church customers on-site. “That’s defi­nitely unusual for an installer with its own produc­tion,” says Reinecke. But for him it is the only way to design the best possible heating system for a church. When an inquiry comes in, the first step is for the respon­sible sales repre­sen­ta­tive to discuss the exact require­ments in the church.

“We still produce our prod­ucts ourselves, so we can quickly and easily make changes to all compo­nents.”
Jürgen Reinecke

He brings a lot of ques­tions with him: How is the church currently used, and how is it to be used in the future? Should only the church be heated, or the sacristy as well? How does the current system look, and what parts of it can still be used? He also performs a thor­ough check of the inte­rior layout, looking for possible sticking points.

Once these matters are cleared up, Reinecke and his team begin to design the heating system. Besides the size of the room, the building mate­rials also play a role. “I need to make different calcu­la­tions for single-glazed windows than for thick, unin­su­lated walls,” says Reinecke. “And then there’s the unusual way it’s used. The temper­a­ture in winter is usually kept around ten degrees and then care­fully increased for services. You can’t model that with stan­dard calcu­la­tions.”

In addi­tion to the exper­tise of every­body involved, the heating special­ists also have a very special trea­sure stored in the cellar at the head­quar­ters in Aachen: a huge archive with files full of infor­ma­tion about the 17,794 heating systems that Mahr has installed in churches in the past 147 years. In many cases, the archive enables Reinecke to find out about local condi­tions quickly. A solid foun­da­tion, mostly analog on paper and micro­film. When designing heating systems, Jürgen Reinecke has to recon­cile the needs of the congre­ga­tion, the building and the fittings. (Photo | Ralf Kreuels)

But the special­ists from Aachen are confronted more and more often with new chal­lenges. A problem faced by many congre­ga­tions is exces­sive humidity in their churches. The reason is not clear yet, but the result is often plain to see: mold growing on altars, organs and walls. Increas­ingly, Mahr fights it with venti­la­tion units and control systems devel­oped in-house. “We measure the humidity and regu­late the systems to estab­lish a better climate,” says Reinecke. These measures make it possible to preserve valu­able fres­coes and historic instru­ments.

However, this is some­times in conflict with the percep­tions of church­goers. “Nowa­days people come from their 22-degree living rooms and drive in their pre-heated cars to a 15-degree church. Of course it seems cold to them. Back when people still had to tramp to church in the snow for 45 minutes, they found eight degrees to be toasty warm,” says Reinecke with a twinkle in his eye. “But I can’t heat a church with an organ up to 20 degrees. That would damage the organ quickly.” The control systems used have a protec­tive func­tion in such cases.

But Reinecke still has plenty of tough nuts like Aachen Cathe­dral to crack. “It’s impos­sible to get this building completely draft-free,” he says. Besides sophis­ti­cated tech­nology, lots of good advice is called for. But for that he is very well equipped.