Heat from a single source

Enjoying comfort­able warmth in a home with central heating with a clear conscience, despite the ever-rising natural gas prices and emis­sions. Remeha wants to make this dream come true for even more end customers. Remeha has taken up the cause of cost-effec­tive, ground­breaking tech­nology and has been special­ising for over 30 years as one of the leading suppliers in the field of gas condensing boilers. For that reason, in 2012 the heating specialist will bring to market a cost-effec­tive, compact condensing boiler for private house­holds: the device is called Tzerra. The new boiler should be attrac­tive above all for customers in coun­tries where, to date, conven­tional heating systems have been more likely to be imple­mented for cost reasons. Tzerra is partic­u­larly space-saving, ultra­light with only 17 kilo­grams and repre­sents a new tech­nical devel­op­ment. Gerhard Selmer, Key Account Manager at ebm-papst
in Land­shut, with the gas-air-module

The core point of the inno­va­tion is the design’s use of a modular system. The entire device consists of only four modules, which are assem­bled at Remeha: a housing and frame, a heat exchanger and burner, a gas-air unit with a burner controller and hydraulic compo­nents with a recir­cu­lating pump. For the devel­op­ment and construc­tion of the gas-air unit, Remeha charged ebm-papst with the task of combining all the parts in a single, ready-to-install set.

In Land­shut, the entire gas-air module is designed, devel­oped and built as a unit for the first time for the Tzerra boiler. According to the require­ments spec­i­fi­ca­tion, it is to assume total control of the boiler and deliver the air-gas mixture to the burner. The solu­tion includes the following parts: mixing adapter, blower, gas-air ratio controller – what is called the venturi nozzle – gas valve, intake noise filter, boiler control system, safety compo­nent and igni­tion trans­former.

As an inno­va­tion, ebm-papst designed the gas-air module as a compact, inte­grated complete system, which includes the blower, gas valve, burner controller, mixing adapter and the elec­tronics for the burner controller and blower combined on one board. “The objec­tive was to save space, while simul­ta­ne­ously devel­oping a simpli­fied plug-and-play method for assembly and main­te­nance,” explains Gerhard Selmer, Key Account Manager for Remeha in Land­shut. “Both help reduce the costs for the device signif­i­cantly.” The complete system ensures that the compo­nents are opti­mally matched to each other and there­fore work effi­ciently. This co-oper­a­tion means improved effi­ciency for Remeha as well: Since every­thing comes from single sources, the admin­is­tra­tive effort is reduced.

During its two-year work, the Land­shut devel­op­ment team was able to draw from its long-time expe­ri­ence in blower and control tech­nology – as well as burner controls. These are respon­sible for control­ling the centrifugal blower used – an NRG 118 – and by actively control­ling the gas valve, it makes sure the gas being supplied is burned in a controlled fashion. The burner controller uses a commu­ni­ca­tion inter­face devel­oped jointly by ebm-papst and the Dutch subsidiary Argus Vision to transmit the speed to the blower directly and digi­tally. This enables the blower to assume the accu­rate speed control itself and thereby react even faster to changes in the ambient para­me­ters. Main­te­nance and repairs are also simpli­fied, since the blower’s oper­ating data, such as speed, motor current, oper­ating time or ambient temper­a­ture, can now be trans­mitted via the inter­face. On the one hand, these para­me­ters allow poten­tial prob­lems to be discov­ered in advance and corre­sponding warn­ings to be issued in the control display. On the other hand, this infor­ma­tion signif­i­cantly eases trou­bleshooting when a repair is needed, which also results in reduced down­time. 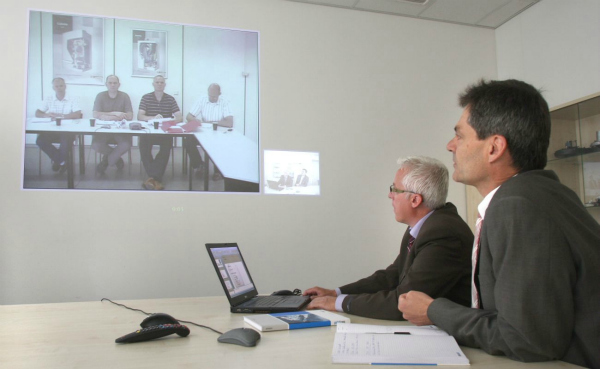 Hans-Joachim Klink, Design Manager at ebm-papst Land­shut, and Gerhard Selmer (from left) during the weekly video­con­fer­ence with the Remeha team

To be able to offer such system solu­tions, at the begin­ning of the year ebm-papst had expanded its product range by adding a gas valve, which has now bene­fited the Tzerra’s devel­op­ment. This gas mani­fold with the patented coaxial safety valve is inte­grated into the gas-air unit in a space-saving manner. The require­ments placed on the aluminium die-cast part of the housing with mixing adapter were also strin­gent. Here, partic­u­larly the narrow flat­ness toler­ance that is manda­tory for gas-tight­ness is some­thing that can be reli­ably achieved at the spec­i­fied dimen­sions only with a lot of specialised expe­ri­ence.

For the first time, the controls for blower and burner controller are combined in a single printed circuit board for the Tzerra. As a long-time partner, Argus Vision contributed its exper­tise in auto­matic gas stokers for this centre­piece. But that isn’t all. Land­shut specially built a new produc­tion line for series produc­tion of the entire unit. Each indi­vidual unit is inspected at the end to make sure it func­tions. Land­shut devel­oped special testing tech­nology and built auto­matic testing devices for this, as Remeha expects a main­te­nance-free minimum service life of 15 years.

To fulfil this require­ment, ebm-papst already conducted test runs and measure­ments using all spec­i­fi­ca­tions during the devel­op­ment phase. These included, for example, service life tests in climate cham­bers, tests with various gas types and oper­ating modes as well as tests for vibra­tion and shock resis­tance and noise level.

Remeha expects the Tzerra condensing boiler – cost-effec­tive to purchase and operate – to attract wide interest in private house­holds as an envi­ron­men­tally friendly alter­na­tive to conven­tional thermal power devices. Comfort­able heat with a low impact on the wallet and envi­ron­ment – winter can come!

With the condensing heating concept, the effi­ciency is signif­i­cantly higher than with conven­tional heating systems, because it addi­tion­ally uses the heat of the exhaust gases gener­ated. Condensing boilers operate with large heat exchangers, through which the water vapour condenses inside the device. The conden­sa­tion heat is fed back to the heating circuit; as a result, it increases the “stan­dard effi­ciency” to 109 percent and thus reduces the heating costs by up to 30 percent. An essen­tial aspect is the lower envi­ron­mental impact: The propor­tion of carbon monoxide (CO) is about a fifth lower and
the propor­tion of nitrogen oxides (NOX) about a third lower with condensing boilers than with older heating units.