In control cabi­nets hot spots can arise, which can reach temper­a­tures of over 90 °C and cause the destruc­tion of sensi­tive elec­tronics. Filter fans, units that combine fans and dust filters, can help by conveying excess heat out of control cabi­nets and elec­tronics hous­ings while also preventing the ingress of dirt parti­cles.

Figure 1: Elec­tronics cooling with filter fans: The air blown into the housing takes up the heat inside, rises and exits through an outlet grill or is extracted by an addi­tional fan.

To ensure that elec­tronics func­tion reli­ably, the waste heat resulting from their oper­a­tion needs to be dissi­pated as effi­ciently as possible. This is usually done using a filter fan in the housing door to blow cold air into the inte­rior. The air takes up the heat inside the housing, rises, and exits through an outlet grill or is extracted by an addi­tional fan (Fig. 1). In prac­tice, however, perfor­mance differ­ences in the filter fans used are often observed. The axial fans that are often used frequently reach their limits, espe­cially at high back pres­sures, which can be caused by high compo­nent density or increas­ingly fouled filter pads. The reason has to do with their oper­ating prin­ciple.

When axial fans are no longer enough Figure 2: The impeller in the diag­onal compact module combines the posi­tive features of an axial and a centrifugal fan.

Since the air flow in axial fans is parallel to the impeller’s axis of rota­tion (hence “axial”), they can convey large amounts of air but only at low static pres­sure. This means they are best suited to free-blowing appli­ca­tions. Outside the correct oper­ating range, i. e. at increasing pres­sure beyond the saddle point, the noise level of axial fans increases consid­er­ably because the flow stalls on the impeller and turbu­lence arises. At the same, the fan’s effi­ciency decreases. A frequent reason for such a pres­sure increase is a dirty filter pad. As a result, centrifugal fans are usually the right choice when appli­ca­tions call for greater pres­sure stability. In this case, flow through the impeller is radial, i. e. perpen­dic­ular to the rota­tion axis. Since the entire flow exits the impeller at the outer edge where the higher rota­tional velocity is used to impart energy, the centrifugal fan produces a greater pres­sure increase. However, the amount of air conveyed is lower.

Motor and fan specialist ebm-papst has combined the advan­tages of these two different fan concepts in a new diag­onal compact module (Fig. 2). The module is currently avail­able in size 200 with iden­tical dimen­sions, with the choice of drives using AC motors or the espe­cially effi­cient Green­Tech EC motors. Both versions are specially designed for use in filter fans. Other sizes are in the plan­ning phase and will be imple­mented as demanded by the market. With axial inflow, the fan blades in diag­onal fans move the air both axially and radi­ally. The advan­tage of such a config­u­ra­tion is air flow that is largely similar to that of an axial fan but with a greater pres­sure increase. The curve is steeper and the saddle point is at a higher back pres­sure, which results in more constant air perfor­mance over a broad range when the fan is installed under oper­ating condi­tions (Fig. 3). With back pres­sure, the adjustable modules equipped with Green­Tech EC motors deliver up to 50% higher air flow than classic axial designs (for the same size and oper­ating point), have lower noise emis­sions and consume up to 49% less power at the same air flow. Over time, this results in signif­i­cantly lower energy costs for cooling control cabi­nets and hous­ings (Fig. 4) while reducing CO2 emis­sions.

As filters become increas­ingly clogged, the diag­onal compact module supplies the air perfor­mance needed for heat dissi­pa­tion. This consid­er­ably reduces power loss in the control cabinet, which in turn signif­i­cantly enhances the cooling action. The diag­onal compact module’s pres­sure-insen­si­tive curve lengthens both the service life of the filter pads and the main­te­nance inter­vals (Fig. 5). With the speed control for the EC motors via the 0-10 V inter­face, the air perfor­mance remains constant even with clog­ging; the cooling capacity adjusts to meet demand, and waste heat can always be dissi­pated in corre­sponding amounts so that the elec­tronics are cooled reli­ably. The same applies when the intake temper­a­ture of the cooling air varies due to diurnal or seasonal effects. 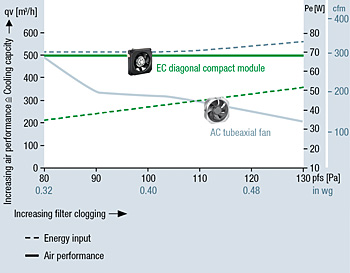 Figure 5: The pres­sure-insen­si­tive curve lengthens both the service life of the filter pads and the main­te­nance inter­vals.

The diag­onal compact modules are also up to 7 dB quieter than conven­tional axial solu­tions – a clearly notice­able noise reduc­tion, espe­cially in situ­a­tions where many control cabi­nets or elec­tronics hous­ings need cooling. At over 70%, the espe­cially high effi­ciency of the EC motors also reduces the amount of waste heat gener­ated by the fan itself; heat that is not gener­ated does not have to be dissi­pated – a welcome effect for cooling appli­ca­tions in partic­ular.

But the diag­onal compact modules have more to offer. They can be easily mounted on filter frames and are mechan­i­cally compat­ible with the industry stan­dard, with external dimen­sions similar to those of the familiar axial design to facil­i­tate easy replace­ment. And they can be installed on either the intake or the outlet side, so those who install filter fans both ways need not stock multiple models. Plug connec­tors simplify elec­trical hookup, and the diag­onal compact module can be installed in four different orien­ta­tions 90° apart depending on the required plug posi­tion. Optional guard grills for outlet or intake side mounting round off the advan­tages offered by the diag­onal compact module. The guard grills are aero­dy­nam­i­cally opti­mized and can simply be snapped on without tools. Now an easily installed, prac­tical and energy-effi­cient solu­tion is avail­able for filter fans to cool elec­tronics hous­ings and control cabi­nets.

The intelligent solution for electronics cooling

The EC centrifugal blower is making inroads into some unusual appli­ca­tions. Uwe Sigloch, Head of Venti­la­tion and Air Condi­tioning Market Manage­ment at ebm-papst, tells us how.»